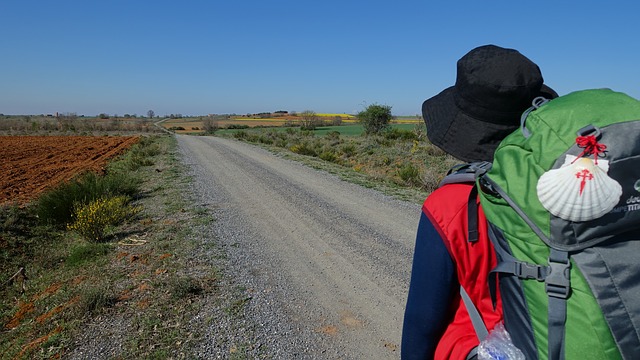 Published by crumphelen on September 2, 2015

Check this! I just finished walking over 1200km from Cadiz in Southern Spain to Santiago de Compostella in North West Spain. In a venture that took 5 trips to make the distance, I just walked 210km in 7 days to complete the final stage of the Camino de Santiago. Walking along each day gives you the chance to slow down, to think and to reflect. That’s what this blog post is really about, I’ve been reflecting on my learning journey and about the success and support I’ve had along the way. Before I come to that though, I’ll enlighten you a little bit about the Camino itself.

The Camino de Santiago is the name given to a collection of pilgrimage routes that lead from all over Spain and Europe to the cathedral of Santiago de Compostella and the shrine of St. James in Galicia in North West Spain. The place has been a site of pilgrimage since the middle ages, and indeed it continues to thrive as such today.

Easily, 500 to 1000 modern-day pilgrims arrive into Santiago each day in the summer months. Pilgrims come from all over the world. They walk alone, as couples, as families or as groups and associations. They are amazingly diverse: from the octogenarian undertaking a few kilometers each day, the life-logging speed merchant, the holidaying couple or professional on sabbatical to the infant being pushed along in its buggy or the joyful group of ‘jovenes’ who bounce along the track as they belt out their Camino ‘playlist’. Needless to say, motivations to undertake the journey are myriad, some deeply personal or religious, some to do with the physical or social aspects of the Camino whilst others take it as an opportunity to disengage from the frenetic pace of modern day life. What’s my motivation you might wonder. Well, the route(s) is signposted as a European ‘cultural itinerary’. Frequently the word cultural is scribbled out in favor of the word spiritual. I asked my husband, Steve, why we were walking the Camino; he said “because it’s an itinerary” – as in ‘because it’s there’. Sounds about right.

There’s fantastic infrastructure associated with the Camino. If pilgrims wish to gain the Compostella, the traditional certificate of a successful pilgrimage, they need to carry a pilgrim’s passport and get it stamped along the way. We were intent on gaining the certificate, but we were also spurred on by the thought of celebrating our success in a nice restaurant with a menu that included scallops and a bottle of fine wine, particularly apt as the scallop shell is the emblem of St. James and is worn by pilgrims to distinguish them as such.

There’s also provision made along the way for pilgrim accommodation or shelter. As is tradition, municipal albergues or religious orders provide dormitory accommodation for around €10 a night. You can however choose your lodging according to your purse, 5 star paradors if you like. We are in the complete minority and carry a tent as it gives you loads of flexibility in terms of the distance you can walk each day. Free camping is permitted in Spain. You can call it wild camping, guerrilla camping or stealth camping if you prefer; either way, it’s not for everyone. Besides, you actually have to carry the tent, plus the rest of the gear that camping entails, and no matter how ‘lite’ you go, it inevitably all adds up. I wouldn’t be able to carry it all on my own. I carry what I can (camping stove, food, water) but I don’t actually carry the tent. Steve has to carry that. This is where I got to thinking about the support we receive as we go along in life.

Support that without which we couldn’t do half of what we do or be half the person we are today.

This got me thinking further. As much as I might like to think of myself as an autonomous learner, you have to wonder if the notion isn’t just a little phony. I mean, if I read a book then surely I’m learning from the author. You get the point; the author is facilitating or supporting my learning. Similarly, since I started using Twitter, started blogging and learning in MOOCs and in open networks my learning has been marvelously facilitated and supported by a whole bunch of people, people who share their work openly online or who engage online and take an interest.

I’ve recently been fortunate enough to have been awarded a 4 year, fully funded MRes/PhD studentship with CREET (Centre for Education and Education Technology) at the Open University. I start in October. Such an occurrence wouldn’t have been possible if it wasn’t for the help and support I’ve received from others. Here, I’m particularly thinking of people such as Jane Hart, who alerted me in the first instance to the potential of Twitter and whose workshops have helped me understand the evolving landscape of learning that’s both social and personal; Steve Wheeler who showed me the value of Twitter and nigh on chapter and verse regarding Web 2.0 and digital pedagogy;  Harold Jarche, blogging genius and formative thinker who prompts me to consider how life is altered in the network era; similarly, Jeff Merrell who’s opened up his master’s course to explore innovations in networked learning; Catherine Cronin, who warmly and inclusively engages the conversation about openness and the democratization of learning, and who’s wonderfully supportive on a personal level too, as is Sharon Flynn and Mary Loftus and the ‘Signals of Success’, or OLDSMOOP, group that includes Paige Cuffe, Sheila MacNeil and Yishay Mor.

As life moves from one phase to another, it’s good to reflect, to take stock and to show your appreciation for any support you’ve been given. It’s also good to pan forward and to set new learning goals or milestones, to outline improvement strategies you’d like to make to your learning regime and, most importantly, to imagine how you’ll reward yourself and celebrate success once all the hard work pays off. So, if I’m successful in my PhD candidacy (Steve, take note), I’d like to dine on lobster thermidor and sip Margarita cocktails on a yacht in the Mediterranean 🙂 In the interests of clarity and propriety, I’d better make it clear that I’m referring here to Steve, my husband, and not to Steve Wheeler. LOL

Finally, before I go, if you want to get more of a feel for what the Camino is about, you might like to check out the film, The Way, starring Martin Sheen; it does a fair job of capturing the spirit of the thing. Or, if you like, you can check out my FB photo album here.