This is something I scribbled during the week, and in this blog post I’ll tell you what I found the answer to be. But, for the sake of tradition though, I’m going to have to start at the beginning.

Chaos abounds in Week 2 of #rhizo14, which I guess is quite befitting of a learning experience concerned with rhizomatic learning. So many conversations distributed across a range of different spaces means that it’s very difficult to follow, keep up, pin down, think, comment and then start to make sense of it, just a small part of it even, and so many conversations speaking from different contexts and entry points. In addition, and just to ensure things stay interesting, provocation has been part of the mix this week too. Firstly with Dave’s initial challenge, and then with blog posts that challenged us to consider the theory associated with rhizomatic learning (Deleuze and Guattari, 1980) or drop the rhizomic prefix altogether.

Yes, the challenge: “explore a model of enforced independence. How do we create a learning environment where people must be responsible? How do we assure ourselves that learners will self-assess and self-remediate?”

Now there’s a loaded paradoxical phrase to unpack and get your teeth into – enforced independence!! The language is provocative, possibly unnecessarily so. Hitherto, the phrase I’ve associated with rhizomatic learning is “make learners responsible for their own learning”, which is getting at the same thing. Isn’t it? Well to start, for an effective learner, independence isn’t the only stance to learning that they need – what about dependence and interdependence? On this point, Catherine Nardi’s post is particularly illuminating. Even then, going back to the phrase “make learners responsible for their own learning”, doesn’t that imply that learners have to be coerced and that “taking responsibility” doesn’t come naturally. Well, I’m not sure that’s necessarily the case. Perhaps thinking more in terms of “allowing” learners to take responsibility would be more beneficial because to a large extent, learners aren’t really “allowed” to take responsibility for their own learning, are they? I’ve been thinking about my learning history and how I came to be a relatively effective lifelong learner. I have to agree with Scott Johnson’s sentiment that because school is “so deliberately generic” being a lifelong learner is something you just have to take on personally; apart from an innate desire to explore, this for me has always stemmed from contradictions between what I was told and what I experienced. Madhura Pradhan says something similar in her delightful blog post too.

“One way to feel independent or to assert your independence is to take charge and break out of the mould and you can only do that when you are uncomfortable or in a situation that demands you to stand out and voice your opinion”.

To permit “responsibility” and enable learners to assert their independence, it seems to me (and to a few others) that schools, or any formal learning context, would do well to not only encourage learners to pursue their passion, but to honour their unique experiences and to give them voice. But such a move would in turn necessitate a conversation about assessment, wouldn’t it? Yes, and wouldn’t it be great to have such a conversation and consider the benefits of such varieties as peer assessment, self assessment and ipsative assessment and how these might help learners to self-assess and self-remediate.

That’s what my short ruminating on the question has come up with anyway. However, it doesn’t tell half the story of the head scratching, mind blowing, obfuscating, illuminating yet ultimately nourishing learning conversations that I’ve been exposed to in #rhizo14 this week.

I think the main reason I found this week intense was not only because there were so many different angles, or experiences, of learning being brought to the table, but also because of a nagging feeling that the discussion was at heart conflating something. So how glad was I then when an old post by Bonnie Stewart from #change11 surfaced and I found her declaring that “we conflate learning and schooling”. That’s it! Indeed we do.

The post was also magic for me in that it helped calm the chaos that had been symptomatic at the start of the week (maybe symptomatic of the start of every week in #rhizo14, what with “detonator Dave” and his provocations). Anyway, it helped me (as per the title of Bonnie’s post) to see more clearly what rhizomatic learning is actually about and what rhizomes are good for, which is kind of ironic because as Bonnie points out, it’s not about seeing learning more clearly; it’s about seeing it differently.

References: Stewert, B. (2011) The rhizomatic learning lens & what rhizomes are good for. Accessed at: http://theory.cribchronicles.com/2011/11/09/the-rhizomatic-learning-lens-what-rhizomes-are-good-for

This work is licensed under a Creative Commons Attribution-NonCommercial-ShareAlike 4.0 International License. 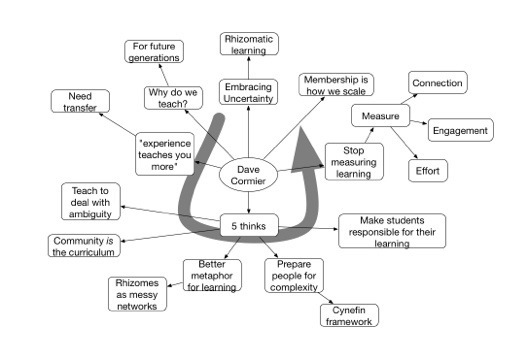 Rhizomatic learning, an open course with Dave Cormier, started on P2PU this week (or is that last week now?). Actually, it seemed to start before the course was officially launched because there was a real flurry of activity appearing beforehand in my inbox via Facebook and Google+ notifications and alerts, which didn’t let up once the course got going either. Such is the interest in this topic. Any way, I didn’t have time to check in to the course right away and find the content or the discover the task at hand but I was getting the gist via the conversation and postings in the channels mentioned above (oh and via the #rhizo14 hash tag on Twitter, of course), so that’s the reason for the sequence of my reflection here.

The nomad is trying to do what I call ‘learning’. Not the recalling of facts, the knowing of things or the complying with given objectives, but getting beyond those things. Learning for the nomad is the point where the steps in a process go away.

It’s what Wynton Marsalis calls ‘being the thing itself’.

Nomads make decisions for themselves. They gather what they need for their own path.

And
In order to create an educational system that allows for nomads we can’t measure for a prescribed outcome.

All of this resonates with me completely. I feel rhizomatic. As such, I’m really keen to explore this further.

Also, I’d like to explore the relationship and/or similarities between Rhizomatic Learning and Heutagogy (self-determined learning). At this point I was grateful to Penny Bentley for asking in the Facebook group, “is there a difference between Rhizomatic Learning and Connected Learning?” Dave Cormier replied by saying that there’s “overlap” but rhizomatic learning is “messier”. Thanks. However, the handy part about the conversation was the mind map posted by Adeline Wall Avril (see below) as it illustrates that a core purpose of rhizomatic learning is to “make learners responsible for their own learning”. So, yes, there’s plenty of fruitful synergies to explore here.